2019 social media usage statistics and research from my friends at Edison Research and Triton Digital, contained in the newest version of their annual The Social Habit study, found surprising shifts in how Americans of different genders, age groups, and races use social media and social networks.

I strongly encourage you to download the entire free report, as there is a lot of more interesting information than what I’ve analyzed for you here.

A note on methodology: This is not some quick poll that a marketer put together. Edison is one of the most-respected research organizations in America. This a random sample survey of 1,500 people, with participants balanced to match USA gender, age, and race distribution. In short, this is data you can trust.

Let’s dive into these social media usage statistics and discuss what the research really means.

Approximately 223 million Americans use social media in 2019. This is a slight increase over 2018, and a slight decrease compared to 2017. Overall, however, social media usage is essentially unchanged over the past four years. Thus, it can reasonably be deduced that the overall pool of social media participants in the United States is unlikely to grow in the near term.

Social media usage is the US is essentially unchanged over the past four years. Click To Tweet 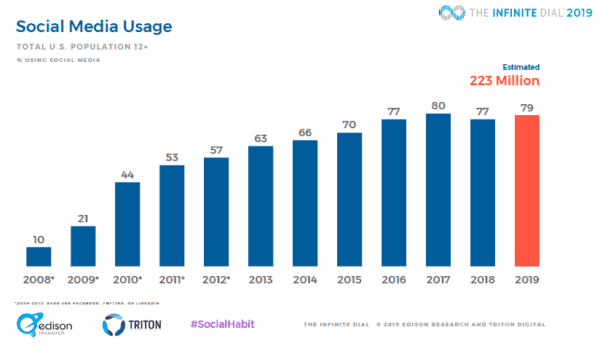 Are Young Americans Burned Out on Social Media?

Typically, when new social networks pop up, they are first adopted by youth, and then the composition of users becomes more reflective of America as a whole when older people start to log on to the “new thing.”

Perhaps it’s lack of an impactful, new social network in recent years, or perhaps there is a larger trend afoot, but this 2019 social media research suggests that social media usage isn’t growing even among young people.

Snapchat usage is stable at 62% usage among Americans 12-34, and the ONLY social network growing among young Americans is Instagram, up from 64% to 66% in the past two years. 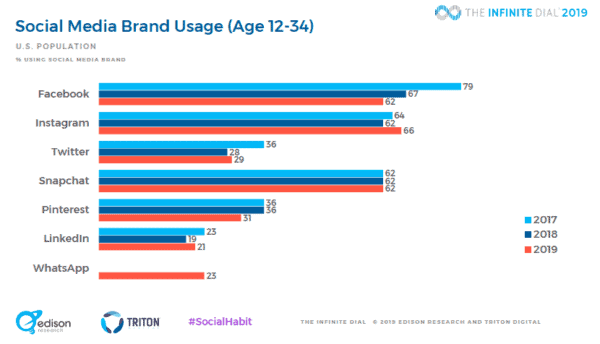 Previously dominated by young people in the United States, social networks in 2019 are now nearly as likely to be utilized by people 35-54 years old. This report shows that usage patterns are starting to even out between young and middle-aged people.

In fact, only Instagram (for now, as its average user will age as it continues its path toward ubiquity); Snapchat (which will likely always be a haven for young people predominantly); and Twitter have more users that are under 35 than over 35 years old. 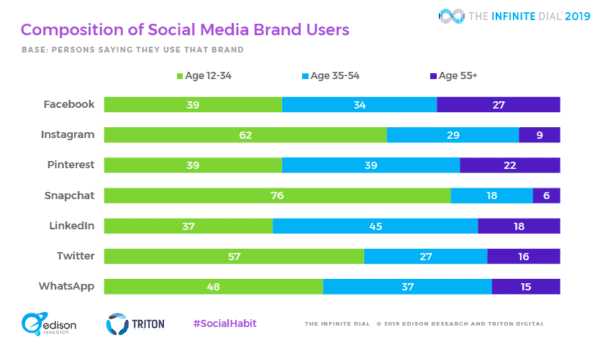 For every social network except for LinkedIn, female Americans are more likely to use that social platform. This is most acutely so for Pinterest (no surprise there). But even for the two largest social networks (Facebook and Instagram), nearly six in ten users are women. 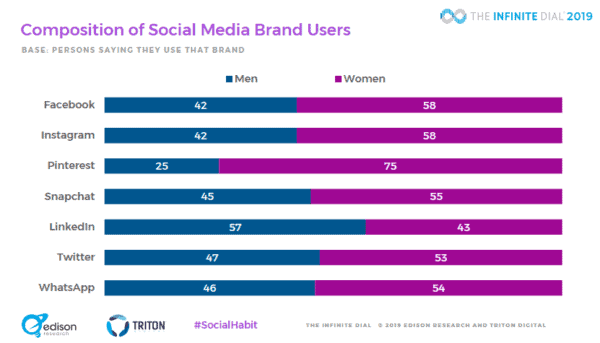 When asked which social network they used most often, Hispanics and African-Americans were far more likely to cite Instagram and WhatsApp when compared to the composition of the United States population.

This is especially true for WhatsApp. 38% of Americans who say WhatsApp is their most-used social network are Hispanic, compared to 15% of the United States that identify as Hispanic. This may be because WhatsApp has historically been more popular outside of America, and these survey participants may be using WhatsApp to interact with friends and family in Mexico and in Central and South America, among other places.

38% of Americans who say WhatsApp is their most-used social network are Hispanic, compared to 15% of the United States that identify as Hispanic. Click To Tweet 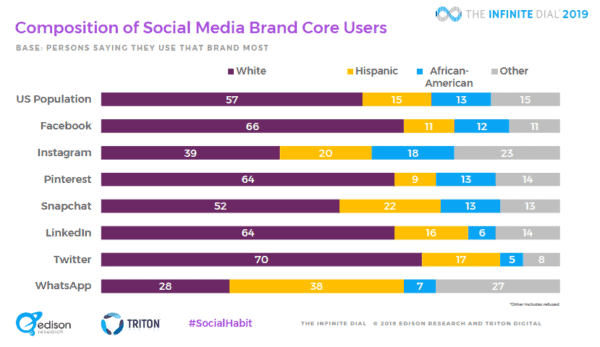 As measured by the percentage of Americans 12 years old or older using the platform, Facebook is actually less popular now than it was four years ago. In fact, Facebook’s popularity today is just slightly greater than it was in 2013.

As chronicled in my earlier overview of prior social media research from Edison, Facebook has lost approximately 15 million users in the past year, nearly all of them between the ages of 12-34. Simultaneously, the only demographic group that is using Facebook more than in prior years are Americans 55+.

At one point, African-Americans over-indexed in terms of their usage of Twitter. Not any more. In fact, the chart above shows that compared to the 13% of Americans who identify as African-American, just 5% of the people who say that Twitter is their favorite social network identify that way. This is the biggest gap between any non-White audience size and usage among any social network.

Don’t forget to download the entire The Social Habit 2019 report. Many more interesting findings about how social media is used today, and how patterns are changing.

Have You Been Social Selling All Along?

Social Media Trends You Need to Know in 2021

Google Trends as an SEO Tool