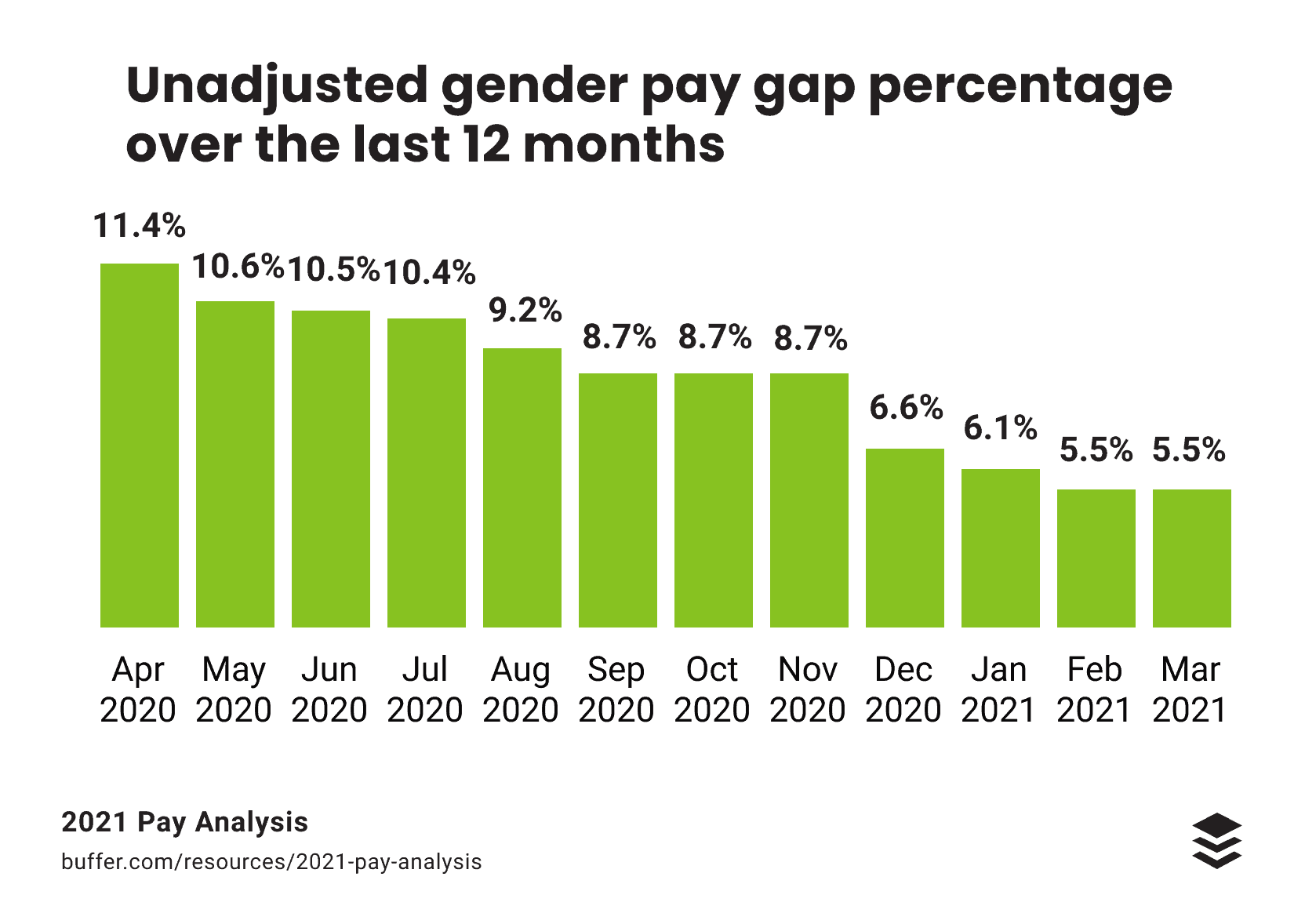 Buffer has been built on the belief that transparency builds trust, holds us accountable, and can push our industry forward. Our salaries have been transparent since 2013, and for the fifth year in a row, we’re sharing our transparent pay analysis. In this report, we share the difference between what men and women earn at Buffer.

We have come a long way in the last five years. Far from the ratio of 70 percent men and 30 percent women on the team when I first wrote this report, this year, we are close to 50/50. And at the time of this report, our leadership team is eight people, five of whom are women.

Here are all of our numbers from our 2021 pay analysis, along with more on the positive impact that transparency has had on the gender pay gap for us.

Here’s what the unadjusted gender pay gap looks like at Buffer as of March 2021:

Note: We specify an unadjusted pay gap as we are comparing earnings between all men and all women at Buffer, regardless of their role or experience level. An adjusted pay gap would be the earning gap between people who perform similar roles. We have no adjusted pay gap at Buffer as we use a salary formula for all of our salaries.

For the second year in a row, our gap has gone down, and this year it went down significantly compared to last year.

We’ve been tracking the unadjusted gender pay gap at Buffer monthly since 2019. Here, you can see our progress over the last year, where the gap has gradually gone from 12.5 percent down to 5.5 percent.

Compared to previous years
Here’s a comparison of all of the years we’ve been running this pay analysis. You can also read each full report at the following links: 2020, 2019, 2018, 2017.

Our gender pay gap has gone down from 15% to 5% in the last two years — how did that happen?

We’ve been paying close attention to the gender wage gap at Buffer since we first started sharing transparent pay analyses, and we’ve been committed to lowering our gap.

Transparency has been a critical factor in lowering our gender wage gap.

Through being transparent, we’ve learned more about the gender pay gap and have been able to keep making changes and adjustments every year. In 2017, when we first ran the report, we didn’t know much about equal pay. We also had a smaller team size with fewer teammates who identify as women and later realized that having one high-earning woman on the team made our gap lower in 2017, so our report wasn’t an accurate reflection of the year for us.

In 2019, we had our highest yet gender pay gap — 15 percent — and that came the year that we also increased the number of women on our team.

The correlation we saw is that when we hired more women that year, our gender wage gap became larger because many of those women were hired at lower experience levels. However, we’ve seen that gap slowly decrease over the years as more women joined the team, and more women have been getting promoted and earning more overall.

The act of reporting the gender wage gap every year has also brought more teams together to focus on how we can improve equal pay at Buffer. It’s not fun to publish a report showing that our gender wage gap is getting worse every year, and several teams have been highly motivated to improve this number.

Our Finance team started tracking gender pay data monthly instead of annually, and it gave us a clearer picture of the impact that new hires and departures have on our overall gap.

Our People team also played a huge role in diversifying our hiring pipeline over the years to bring on more women in higher-earning positions. Our People team’s work is especially impressive considering that as a long-term focused company, we aren’t growing our team considerably year-over-year. Our team size was 72 teammates in 2017 and is 83 teammates now.

The ratio of teammates who identify as men and women at Buffer has improved significantly.

When we first started reporting on equal pay, we were 70 percent men and 30 percent women at Buffer. That meant that any change to the number of women at Buffer had a significant impact on our gender pay gap, and it was much more likely to fluctuate when women joined or left Buffer.

Since then, our gender split has become nearly 50/50 with 44 men and 39 women on the team, and at the time of this report, our leadership team at Buffer is eight people, five of whom are women.

Now, we can safely say that our five percent gap isn’t a result of one high-earning person on the Buffer team. This consistent decrease of our gap over the last two years is a result of many areas of work, and it isn’t going to change drastically in one month.

What’s next for equal pay at Buffer?

If you know of other companies sharing their gender wage gap publicly, or if you’d like to share yours publicly, send us a tweet. We’d be happy to chat!

Want to work at a company with pay transparency? We’re hiring, check out our open roles!