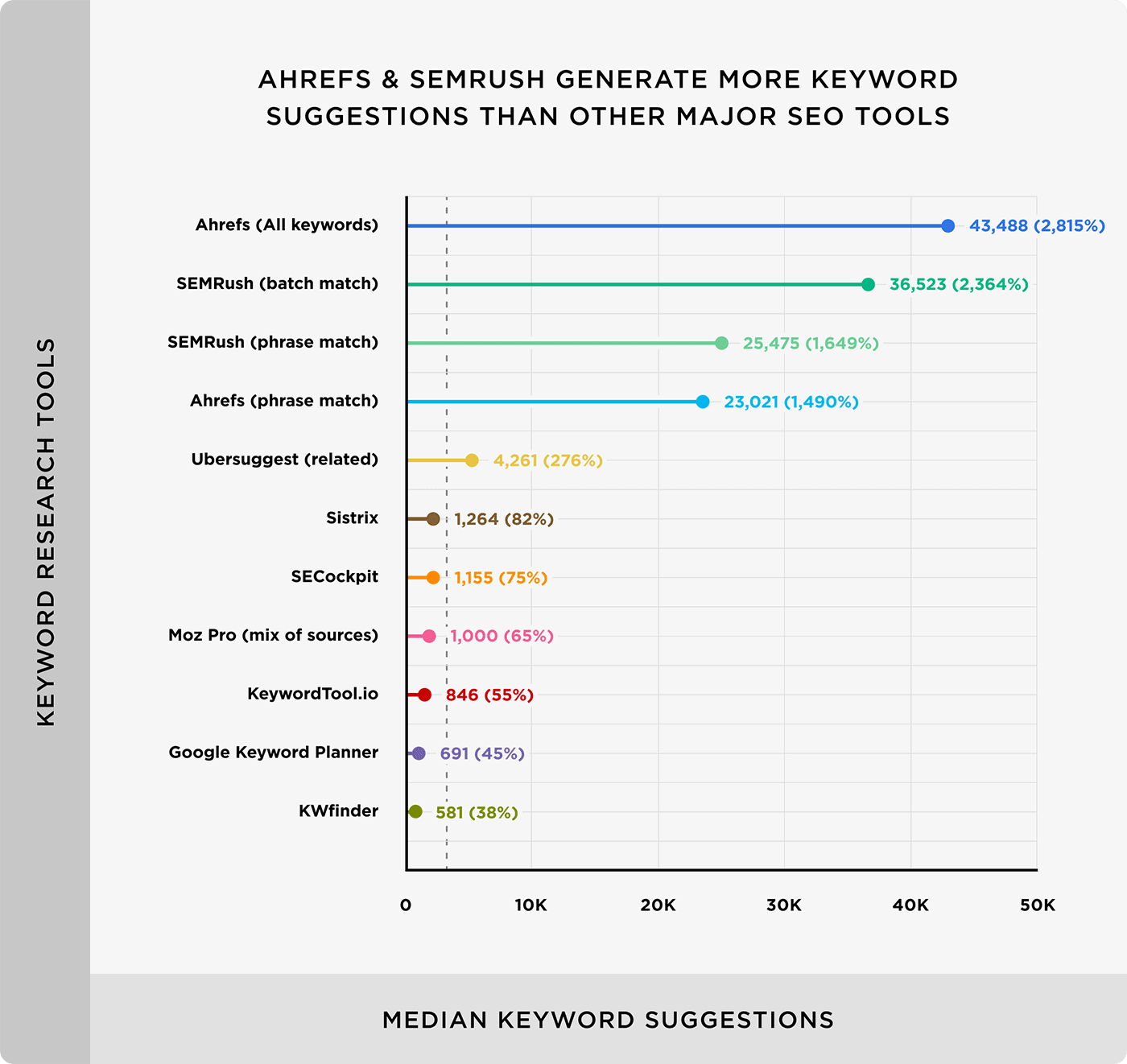 We recently analyzed 10 of the most popular keyword research tools in the SEO industry.

To compare the accuracy and breadth of the data found within each tool.

To our knowledge this is the first large-scale comparison of the data provided by various keyword research tools.

And now it’s time to share what we discovered.

Summary of Our Key Findings:

1. Ahrefs and SEMrush generate the highest number of keyword suggestions, followed by Ubersuggest, Sistrix, and SECockpit.

5. All the SEO tools in our analysis had a significant negative correlation between search volume and keyword length.

6. Certain tools tend to outperform others in terms of keyword suggestions in specific industries. For example, while they generally produce fewer suggestions than SEMrush and Ahrefs, Moz and Google Keyword Planner tend to generate a relatively high number of suggestions in the web hosting niche. And Ubersuggest is particularly good at finding keyword ideas in the marketing, travel, and diet niches.

I’ve provided details on our findings below.

Ahrefs and SEMrush Generate The Most Keyword Suggestions. KWFinder and Google Keyword Planner Provide The Least

When it comes to sheer number of keyword suggestions, Ahrefs and SEMrush tend to outperform other major SEO tools.

Here is the “beeswarm” plot that compares keyword suggestion volume to the tool-wide average.

Generating a large list of keyword ideas is an important feature of any SEO tool. In fact, many tools prominently display how many keyword ideas they’re able to generate from a single seed keyword.

Why is coming up with thousands of keyword ideas so useful?

Well, in many cases, someone that enters a seed keyword into a tool isn’t actually looking up stats for that exact keyword.

Instead, their goal is to find long tail versions of that keyword. Sometimes they also want the tool to generate laterally-related keyword ideas that they’d have trouble coming up with on their own.

Obviously, you can’t judge the value of a keyword research tool based solely on how many keyword ideas that it spits out. However, it’s an important feature that factors into the decision of which tool to invest in.

Although designed for Google Ads, many marketing professionals use Google Keyword Planner (GKP) for SEO campaigns.

Even when used solely for SEO, the Google Keyword Planner has several things going for it.

First of all, unlike many keyword tools out there, it’s free.

But more important than pricing is the fact that the data comes straight from Google. Which means that the data in the GKP should be super reliable compared to 3rd party tools.

It should be noted that GKP search volumes are presented in a range unless you’re running an active Google Ads campaign.

Despite those shortcomings, the GKP is a mainstay keyword tool for many SEO professionals.

According to our analysis, the GKP doesn’t come up with nearly as many keyword suggestions as other major paid tools.

In fact, the GKP provides around 68% fewer average keyword suggestions compared to the paid tools in our analysis.

And when we compared the GKP against the top tools, we found that the GKP generates 98.1% fewer suggestions than SEMrush, 97% fewer than those made by Ahrefs, and 83.8% fewer than by Ubersuggest.

Key Takeaway: Google Keyword Planner has its merit as a keyword research tool for SEO. However, most major SEO tools vastly outperform GKP in terms of producing keyword suggestions.

Sistrix and KeywordTool.io Have Relatively High Monthly Search Volume Estimates. Moz and Ahrefs Estimates Tend to Be On The Lower End

One of the most interesting findings from this analysis is that the tools in our analysis all have very different monthly search volume estimates.

KeywordTool.io and Sistrix tend to estimate keyword search volumes higher than most other tools. On the other hand, search volume estimates in Moz Pro and Ahrefs are generally lower.

In general, we found a wide range of keyword volumes for the same exact set of keywords.

For example, take a keyword like “insurance”. According to KeywordTool.io, that keyword gets 368,000 searches per month.

However, if you look up that same keyword in Ahrefs, you’ll get a completely different number.

Which tool is right?

While it’s impossible to say based on our research, it’s important to note that each tool uses different sources and methodologies for estimating search volume.

For example, both Moz and Ahrefs use “Clickstream” data

(In other words, data pulled from third party tools that are modeled on actual user behavior).

On the other hand, SEMrush uses a combination of data from GKP and AI forecasting.

Both approaches have their pros and cons. So there’s no “right” way to estimate search volume.

And while we’re not able to crown one tool at “the most accurate”, it is important to see which way each tool tends to skew, whether high or low. If the tool that you use tends to overestimate a bit, you may want to keep that in mind as you decide on a keyword. And the same is true for a tool that estimates search volumes lower than most other tools.

Why look specifically at popular terms? Because search volume differences among high-volume terms have the greatest real world impact on SEO.

For example, let’s say that a specific tool estimates that a keyword gets 100 searches per month. If a tool overestimates the volume by 25%, it’s only 25 monthly search off. In absolute terms, that’s not very significant.

However, if the same tool overestimates a 100k/month keyword by 25%, that’s off by 25 thousand searches.

This is the kind of thing that can make or break an SEO campaign.

One of our most consistent findings was that, across all of the tools that we included in our analysis, keyword length had a significant negative correlation with monthly search volume.

For example, using Google Keyword Planner, a keyword with 20 characters results in an average search volume decrease of 5,177 searches/month compared to a search term with only 10 characters.

To anyone experienced in SEO, this should come as no surprise.

So-called “long tail keywords” are generally known to be longer and to get fewer searches than “head terms”.

But it was interesting to note that this negative relationship between keyword length and search volume persisted across all of the tools that we looked at.

Key Takeaway: Keyword length is negatively correlated with average monthly search volume. Going from 10 to 20 characters reduces the average search volume of a keyword by 5,177 searches per month.

Perhaps our most noteworthy finding in this entire analysis is that, when it comes to generating keyword suggestions, different tools perform better in different industries.

Specifically, Ahrefs and SEMrush are higher-performing than the other tools that we analyzed in the categories: home improvement, legal, automotive, solar energy, travel, and weddings.

Ahrefs appears to be especially strong when it comes to generating keyword ideas about travel and web hosting.

On the other hand, Google Keyword Planner and Moz were comparable to the other tools in categories like web hosting. However, they produced significantly fewer suggestions in other industries.

Interestingly, the free Ubersuggest tool yielded a comparable number of keyword suggestions related to marketing, travel and diet as SEMrush and Ahrefs.

The potential implication of this finding is that, rather than deciding on a tool based on its sheer ability to generate keywords, it may make sense to use a tool that’s best for your industry.

While Ahrefs and SEMrush produce the most total suggestions, if your site is about web hosting, Moz or the Google Keyword Planner are somewhat competitive to those two tools in that specific niche.

Key Takeaway: Certain keyword tools perform better than others in specific industries. Ahrefs tends to be strongest in the travel and web hosting space. Ubersuggest does relatively well in niches like marketing, travel and diet. While still far behind SEMrush and Ahrefs, Moz and GKP are relatively competitive in the web hosting space.

Keyword Difficulty is used to decide whether or not to target a specific keyword. This is especially true for newer websites without much in the way of Domain Authority.

However, as we found in this analysis, Keyword Difficulty is far from a consistent metric. Certain tools tend to estimate Keyword Difficulty higher than average. While others err on the side of underestimating how hard it will be to rank for a specific term.

And here is a more full picture of keyword difficulty distribution.

In SEMrush, this term has a Keyword Difficulty Score of “77.61”.

However, that same keyword has a score of “8.06” in SECockpit.

We found small differences in cost per click (CPC) estimates among the various SEO tools in our study.

Specifically, the CPC estimates in SECockpit are 26% above the median. On the other end of the spectrum, SEMrush’s CPCs are 20% below the median.

(Note that Moz does not provide any information on cost per click, so they weren’t included in this analysis).

However, I should point out that CPC estimates are generally similar among SEO tools. Roughly 11% of the keywords have CPCs differences below $0.50.

As an example, if you look at the CPC for a term in a tool that tends to estimate CPCs on the higher side (SECockpit) and compare it to CPC numbers in SEMrush (which estimates CPC on the lower end), they’re not that different.

But there are situations where CPC estimates have extreme differences. For example, “fsa store coupon” ($1.10 in Ahrefs, $464.745 in Google Keyword Planner) and “register domain name google” ($16.94 in KeywordTool.io and KWfinder, $480.5 in SECockpit).

Even minor differences can impact your estimated ROI from ranking for a specific keyword. And if you apply small differences to dozens of keywords that you plan on ranking for, these CPC differences do add up.

When Comparing CPC Differences to Google Keyword Planner, SECockpit Remains Relatively High. CPCs In SEMrush and KeywordTool.io Are Well Below Those Found In GKP

Considering that the GKP is the most direct data source for actual CPCs, we decided to compare CPC values among the tools using the Google Keyword Planner as our “gold standard”.

Key Takeaway: Using GKP as the “gold standard” for CPC-related data, we found that SECockpit’s CPC numbers to be considerably higher than those reported in the GKP. Most other tools in our analysis report CPCs that are lower than those found in the Google Keyword Planner.

To summarize these findings, we decided to visualize the performance of search volume, difficulty score, and cost per click (CPC) for each SEO tool compared to the overall median.

The largest discrepancies in overall performance are for:

Note: No data was available in case of keyword difficulty scores for Google Keyword Planner and cost per click for Moz Pro.

I learned a lot about the data found in various keyword research tools from this study, and I hope you did too.

If you’d like to see the nuts and bolts of how this research was conducted, here’s a link to our methods PDF.

What was your #1 takeaway from today’s study?

Or maybe you have a question about something that you read.

Either way, go ahead and leave a comment below right now.

Yoast SEO to launch on Shopify