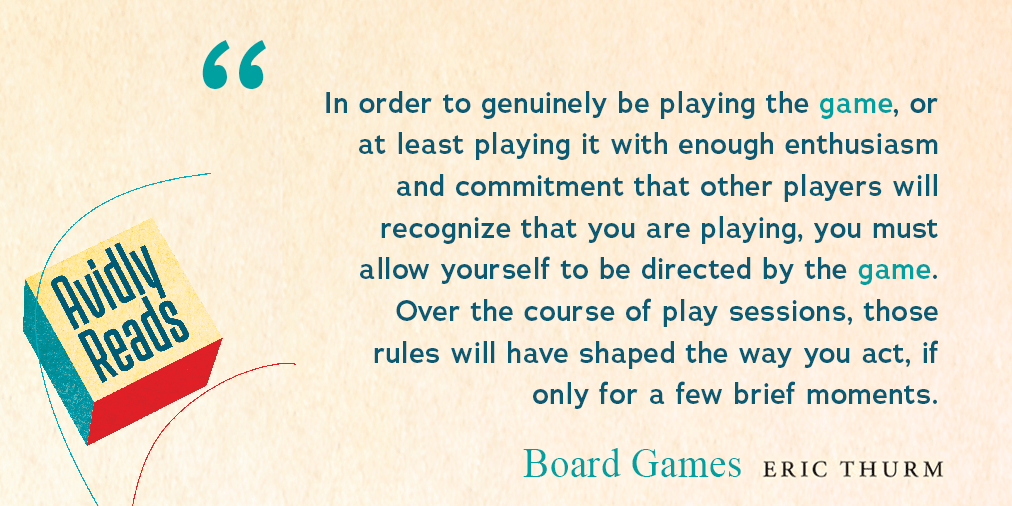 Reprinted from Avidly Reads Board Games by Eric Thurm with permission from NYU Press, © 2019 by New York University.

A good game of Pandemic is like a frantic, multiplayer game of Tetris. At any given moment, there are several crises threatening to take over the board: Beijing teetering on the edge of an outbreak, a low supply of yellow cubes, only a few cards left in the deck. There are three different ways to lose a game of Pandemic and only one way to win. In this high-pressure environment, it’s easy to miss things — a connection between two cities that will cause a chain reaction in case of outbreak or the fact that getting to a research station in time to cure one of the diseases necessitates discarding one of the cards that made up part of the cure. If you’re playing it right, that game slowly transforms into your own B-movie, with equally dramatic stakes. Imagine a scene in Outbreak or Contagion in which the government is forced to engage in desperate triage, allowing certain cities and people to fall victim to the outbreak in order to ultimately secure a cure and save humanity. In my experience, the strategizing that goes into an exciting game of Pandemic rivals that of any finely balanced Eurogame.

The full Pandemic experience can be intoxicating. In a really good session, everyone in the group stares at each other intently, unable to imagine anything else — or not caring to. (This is, in essence, the experience that games theorists and developers are invoking with the term “magic circle.”) Without having to devote part of your mental energy to scheming ways to defeat your fellow players, I’ve found, it’s much easier to fully enter the mythical space of the magic circle. Except that you don’t even need friends, really; it’s possible to play Pandemic solo, since one dedicated player can float around the table taking moves for all of the different characters. But that very possibility — that the existence of a nonhuman opponent means you don’t have to play with other humans — highlights a serious challenge with cooperative games.

The big problem with collaborative games tends to be what hobbyists call “quarterbacking,” when one player who has played the game before, or at least is a more seasoned gamer, takes control of the session, dictating moves for everyone else in order to maximize the likelihood of winning. If you’ve ever worked on a group project or in an office where one person’s personality and ideas took up all of the space in the room, you’ll understand intuitively that quarterbacking can often make these games infuriating and deeply unfun. Sometimes the quarterback does know the best move, especially in cases in which they’re the person who owns the game or has foisted it on their unsuspecting friends. But the fun part of a collaborative game is when the entire group figures that out together and manages to experience a collective moment of breakthrough, with opportunities for everyone to contribute.

Quarterbacking chokes off the best elements of a collaborative game experience. But as a strategy, the rules of any given collaborative game frequently allow, and even encourage, quarterbacks: the enemies in a Legend of Zelda game are controlled by code that remains hidden by design, but the artificial intelligence in a board game has to be more or less transparent to the players in something like a deck of cards. The players, then, have to do the work in place of a video game’s code. A sufficiently dedicated quarterback — say, a mathematically inclined, quantitative gamer — can come relatively close to “solving” a game like Pandemic, without having to worry about the other players’ unpredictable strategies. In any given case, there’s a best move, and the goal, in the mind of the quarterback, is to figure out what that is and impose it on the rest of the group. Preventing this is a problem for game designers trying to craft a better, more immersive play experience, as well as for the players. (If your game can be solved by one person, why even make a four-player game? Where’s the fun in crafting an elaborate form of solitaire?) In the same way you want a competitive game to give everyone an equal chance to win, a collaborative game needs to give everyone a chance to play.

From this perspective, the existence of quarterbacking is also a strong argument against “winning” as the primary motive behind playing games, at least for anyone who’s used to experiencing a quarterback. If the purpose of playing Pandemic was to win, wouldn’t most groups strongly encourage quarterbacking or at least submit to the directives of the person who’s most likely to lead the collective to victory? That way, at least, all players could say they won — say they won: it’s unclear if someone in this situation truly wins the game on anything other than a technicality, the way a benched player might receive a championship ring that doesn’t quite feel like it belongs to them. That quarterbacking situation isn’t how any reasonable gameplay session actually shakes out. If one person tries to claim that degree of control, they’re frequently subjected to a mutiny.

I’ve seen this up close and personal quite a few times…usually as the quarterback. Once I get into a game, I tend to become obsessive about it and insist that as many friends as possible at least try it, because they might like it. (After all, whom else would I play with?) Pandemic was a prime example: when I first got into it, some time in late 2015 or early 2016, I played hungrily with my friends who’d introduced me, until it was time to start indoctrinating other people. By then, my attempts to introduce friends to a new game had become well-honed routines. In these games, I would frequently use other people’s turns to explain the rules by taking their turn and giving off a triumphant, expectant, “here’s how it’s done” smirk.

Over time, it’s gotten easier for me to leave winning moves on the table, only bringing them up to friends as teaching examples once the game has already ended. (Besides, I can usually play well enough to shore everything else up.) It’s more important to me that a game go smoothly as a social experience than that my group wins, but sometimes it’s still hard to resist the impulse to yell about how another player should obviously move to Cairo to exchange the city card and definitely shouldn’t be building a research station in Khartoum.

Thankfully, as I’ve gotten more into cooperative games, I’ve found other options, including the Pandemic mobile app, which has transformed the game into a much more palatable solitaire experience. Playing Pandemic by myself without needing to set up the board or shuffle the deck feels like cheating in some sense, like you’re not actually playing the game even though it shares the same set of rules. It’s endlessly repetitive, since you can quickly quit if a game isn’t going your way, and the rules are almost endlessly pliable. It’s a brute-force experience that’s probably the closest I’ll come to actually being able to “solve” Pandemic, largely by gaining a clearer sense of what the best move is in any given scenario. The biggest difference between the app and the analog game? Often, the best move is resetting and starting over. Playing on the app more closely resembles an experiment conducted with the rules of the game — with the opportunity to quit games and try again using any of the Pandemic roles and several of the game’s expansions, the app can act as a useful way to learn about the game. Hopefully, it will ultimately serve to make my actual games more fun.

Eric Thurm is a writer whose work has appeared in, among other publications, Esquire, WIRED, Real Life, and The New York Times.